Drone Delivery the Future of Toast

London is bewildering in its levels of culinary creativity. A gourmet crisp shack, pop up potato joint and grilled cheese sandwich shop all exist within the media haven of Soho.

A new hire at Toast, Harry Harryman was quick to point this out. He jumped to work immediately, capitalising on this booming trend. Partly transforming our video production shop into a street food business with a difference – a drone delivery food service. Toast introduced the next step in “snack UX” – drone food delivery Toast.

Once rumours of the project leaked out we came under intense interest from various parties in venture capital land. Quotes about the project are too numerous to mention. It reminded all at Toast of the now-famous “project ginger” from a few years back. We were about the change the food delivery landscape forever, our drone delivery idea was to be revolutionary.

Toast invited investors to London for secret demos a few months after starting up. Then the service ran in stealth mode for about 6 months. We experienced problems in secretly beta testing the service in a built-up area. We found a new location, Frenchman Flat Nevada after initial scouting. It seemed a good location given its secret nature and numerous abandoned building structures. We later ruled out ex-nuclear testing site Frenchman Flat as the drone rotors had a tendency to stir up ground dust which would be a health risk.

We spent a lot of hours during the research phase testing drones. We needed a drone that we could launch from the rooftop of our office in Soho, London. The crowded nature of Soho’s skyline meant ruling out catapult-launched drones. Next, we had to test the payload limitations of the drones. Fortunately, Toast isn’t a heavy cargo so most past this stage. In the end, speed was our final deciding factor. Having a drone that could venture out into the streets of urban London, deliver its cargo and return the quickest was going to be the difference between success and failure.

At the time we were perfecting our drone food delivery service Elon Musk was also perfecting his Space X reusable rocket technology. We went through the same highs and lows as Elon and occasionally we’d send him updates on our progress. We like to think that in a small way our struggles and our perseverance inspired him in some of his darkest hours.

Once we’d decided on a drone platform we had to set about engineering the other elements of our amazing product. The mapping software was probably one of our toughest undertakings. Using off the shelf mapping software with road level mapping soon got us into difficulties. Our test drones would constantly fly into overhead light fittings. We eventually solved this problem by transposing all our mapping data by 22m on the Y axis, our drones could fly the same roads but now in total safety. (*Each week we manually add new tower crane locations.)

Getting the end-user delivery system to work consistently was a struggle. Our first system the Predictive Enabled Altitude Drop Orientation setup failed so many times that we invented the Pre-Enabled New Initiation System. Which has proved well worth the effort. We’re currently in talks with the Patent Office about our application which they say has some naming issues.

An epiphany from above

One eureka moment came when devising the packaging. We had hired a Japanese 7th Dan Origami master to sculpt our product packaging which he did. After 4 months and 32,304 prototypes, we had the simple four flapped folding box system for our drone food delivery service. However, incorporating a napkin into our box without it getting either sweaty or jam stained proved problematic. We tried numerous approaches until one day the packaging team were out with the parachute delivery team at a moustache grooming workshop when the epiphany happened. Why not use the napkin as a parachute? A legend was born and people all over London have got used to seeing sky blue parachutes drifting lazily through the clouds. 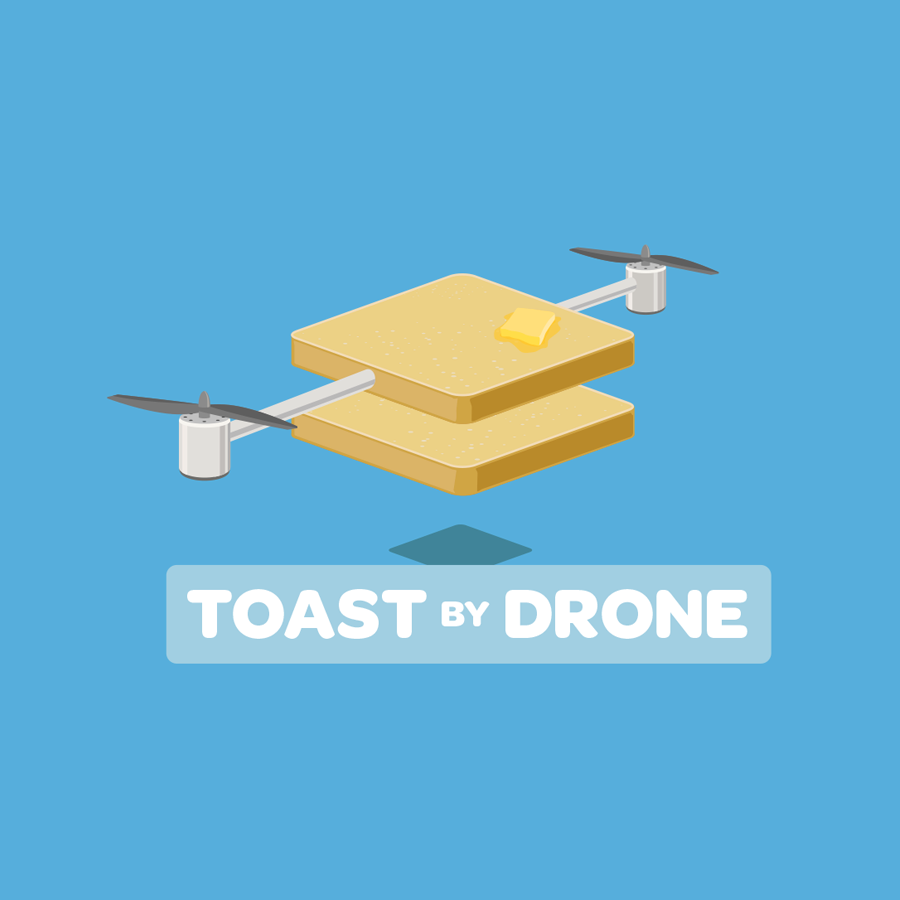 We crowdsourced the topping options, using the public to choose their favourite Toast toppings. The public had to pick what was included in our drone delivery service. Unfortunately, our pole came out a month after the public had been denied the honour of naming a polar research vessel “Boaty McBoat Face”. Our pole was hijacked by enraged citizens and for a while, mustard and sea-urchin were trending in first place. Once the furore died down we filtered the list to include only the more sensible options.

Pricing was set at £7.99 per slice which seemed sensible to the team at the time. He had toyed with a £9.30 Yak’s butter option but this was seen as elitist and withdrawn before launch day.

11:36 23/2/21 Toast drone food delivery service has been suspended for the foreseeable future due to safety concern involving a minor and the aerial delivery system. We apologise for the inconvenience to those who did not receive their orders. We are not looking to reimburse you at this time or in the future. Thank you very much for your understanding. The Toast Team.